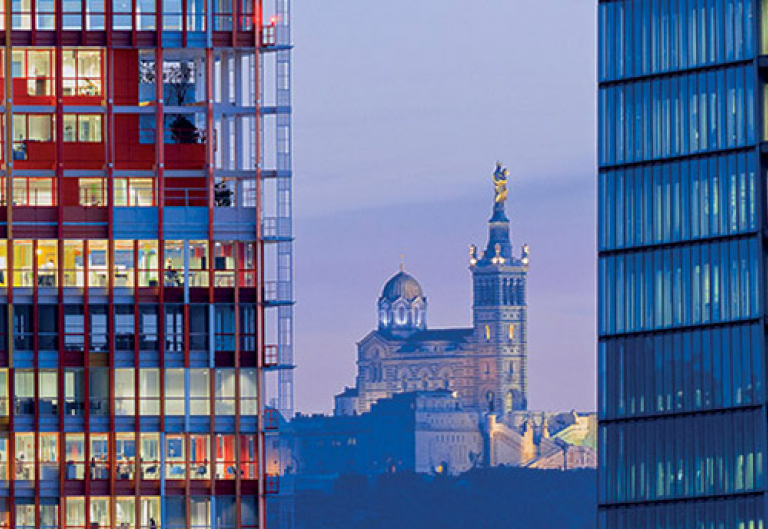 Our city is ranked 2nd out of 114 European conurbations for its dynamism and takes 40th position for the most innovative cities in Europe, ahead of Milan, Barcelona and Rotterdam, according to the OECD report of December 2013.

After being crowned the European Capital of Culture in 2013 and the European Capital of Sport in 2017, it hosted the Euro 2016 championship. Marseille is getting ready to become the first French city to host Manifesta – one of the largest contemporary art biennials in the world – in 2020, as well as the 2023 Rugby World Cup and the 2024 Olympic Games.
These major events, significant milestones for our area, reflect Marseille’s influence and strength at an international level.

For more than 20 years, Marseille has been on the move – reinventing itself, undergoing major transformations and supporting major development projects for public areas, while seeking to optimise the service offered to users and closeness to citizens.

More than ever, Marseille is strengthening its dynamic as an attractive city synonymous with happy living, for both its citizens and for those who opt to invest in it, settle there, or visit.

It is also creating favourable conditions for this development:

It is because Marseille is rich in these assets and because of its ability to structure this mix of offers that it brings people together and drives energy and talent. This is what makes it so attractive.

Marseille wants to share the strength of this dynamism with its inhabitants, all the public institutions, local, national and foreign entrepreneurs and all of the region’s actors as well as all of those who come to it, and invite each and every one of them to share this common destiny.

We Are Marseille is the unique symbol of this state of mind, of an open identity, of a desire to proudly approach the future together and reinforce our openness to the world, in keeping with our history.
The expression “We Are Marseille” was used for the first time in 2015 by Jean-Claude Gaudin at the J-365 Euro press conference:
“We Are Marseille”... This is the energy that we are fostering for our city! This is our hope for its future! “We Are Marseille” – This is our identity!”
“We Are Marseille” is a rally, a call for tolerance, an ambition shared by all inhabitants to promote a city and build a region that inspires us and makes us proud. It is with hope that we can succeed!”

Because, above all, Marseille is:

The event is already promising to be memorable. On 22nd and 23rd May 2020, the City of Marseille will host the European Professional Club Rugby (EPCR) finals: the Champions Cup and the Challenge Cup.
The two main matches on the European calendar will be played at the Marseille’s stadium, in front of crowds of 67,000 people coming from all over Europe.

Marseille is the 4th French city to host these prestigious European finals, after Bordeaux, Paris, and Lyon. This time the event is even more special, as it will mark the competition’s 25th anniversary.

Marseille may be football territory, but it also maintains close ties with the world of rugby, and has demonstrated this several times over the years by hosting major competitions, such as the 2007 Rugby World Cup, the 2010 Challenge Cup final, TOP 14 matches, French national team test matches, and for the first time: a Six Nations Championship match (France-Italy in February 2018).

Marseille: a home to major events
Sport is a major boost to the economic attractiveness of Marseille and its surrounding region. After hosting the first round of the Fed Cup, the UEFA European Championship, becoming European Capital of Sport in 2017, being a stage town for the Tour de France cycling race, Marseille will be hosting sailing and football events during the 2024 Olympic and Paralympic Games in France.